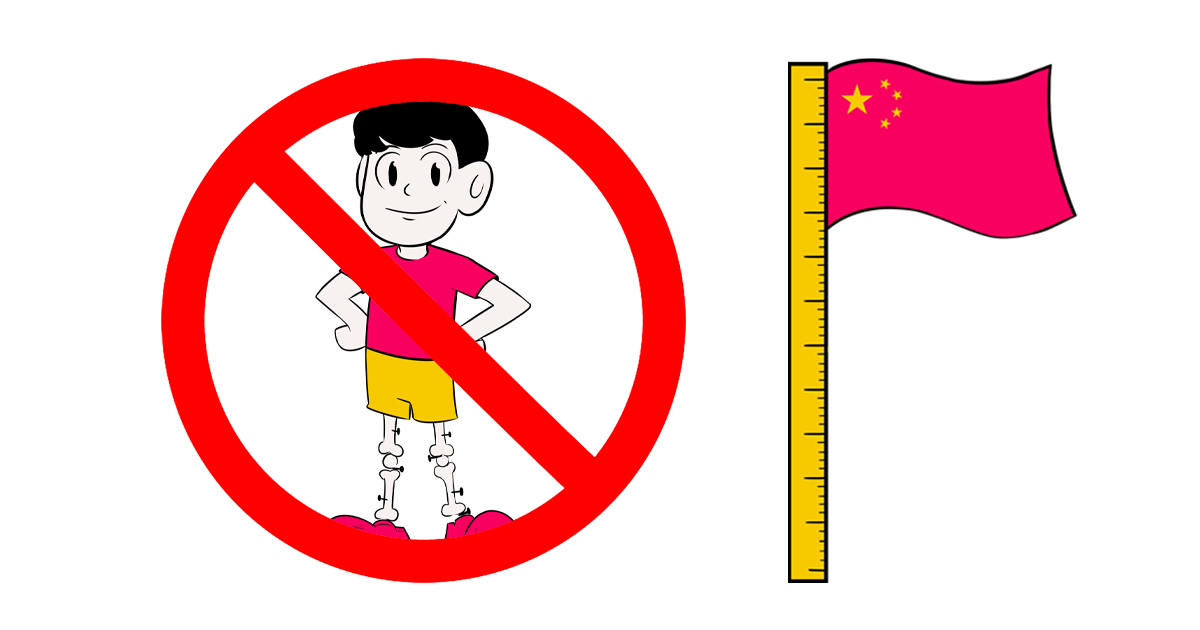 This leads us to wonder, where do the Chinese get height surgery now, why is it so popular, and what’s the worst that can happen if you get stature lengthening in China?

Even though it’s banned, many doctors are incentivized to perform cosmetic limb lengthening because it’s an elective, cash-paid procedure. Being such a large amount of money, some doctors or outright frauds continue with subpar surgery even though they lack the experience and may do it incorrectly.

While surgery is becoming more common to fix one’s height, being tall in China wasn’t seen favorably until recently.

Historically, height was never seen as an issue in China; many great leaders stood no taller than five feet high. As a testament to that, Li Keqiang is one of the most powerful men in china and stands at 5ft 7 inches (the average height for Chinese men). Despite this, recent height discrimination has become a complex issue in China. [1]

Partly due to westernization, Asian’s among other ethnicities, have become more conscious of their height and overall stature. Some job listings in China even have height requirements.

The new height obsession is due to publicized success stories from higher-statured people on TV shows and billboards, for example, Xing Zhaolin, a famous actor in China who is 6ft 1in tall [2]. His height has nothing to do with his fame, but Asian culture sees a connection between size and status, so many Chinese people feel they can’t be successful unless they are tall.

How Height Can Affect Careers & Romance in China

Due to the height superiority culture in China, it’s difficult for a person of short stature to secure a leadership role or a potential partner. Women and employers alike set height requirements for potential prospects. Many businesses publicly display their job advertisements with specific height requirements; sadly, woman’s dating profiles are no different.[3]

To gain employment or a date, some men go as far as wearing heel inserts to make them appear a few inches taller. As you may expect, some even go as far as getting leg lengthening surgery to permanently cure their height dysphoria.

In the world of social media and the internet, the never-ending high standards of beauty and, in this case, height expectations have become ever more present. Overall, it has become harder for people to live up to social standards, with many becoming more particular with who they want to date and employ.

With the procedure banned in China in 2006, some Chinese pay massive amounts of money under the table to have surgery in their home country. These so-called physicians don’t have the experience to perform the surgery successfully and can quite literally disable their patients for life.

For example, Xiaomei, a 25-year-old woman from Guangzhou, went to the Guangzhou Yuandong Cosmetics Hospital in March 2005. She was quoted 50,000 yuan (approx. £4,657) for a leg-lengthening procedure to increase her stature. She wanted to increase her height at least 8cm, but the surgery resulted in a permanent disability. [4]

There’s been talk online about doctors still performing the surgery in China as late as 2020, but calling it another name so it doesn’t raise suspicion to their governmental bodies. After some research, we discovered at least two doctors in China who still perform the operation, but it was banned for a reason, so avoid surgery in China at all cost. Since the surgery is prohibited in China, we’ve chosen to exclude the doctor’s names, but luckily there are several other places you can get surgery to make you taller.

Where Is Cosmetic Limb Lengthening Allowed?

There are qualified physicians across the globe, but one should be careful when choosing a surgeon due to the inherent risks associated with the procedure. Additionally, aftercare and physical therapy is equally important. Just imagine being stuck in a random country with an infection or unable to walk…

On a brighter note, doctors like Dr. Payley and Rozruch have near 100% success rates for their stature lengthening patients, but they are also some of the most expensive surgeons in the world ($100,000-$300,000). Both of these surgeons have published original studies, have years of experience, handle 100’s of leg lengthening surgeries annually, and primarily operate on non-cosmetic leg lengthening patients, which goes to say they have plenty of orthopedic experience.

I Want to Be Taller: What’s Next?

No matter where you reside, if you still want to increase your height, make sure you’re deciding from a sound place and get the surgery done in a country where it’s legal. Secondly, if you’re 100% certain, you should begin researching the best doctor you can afford. No matter the country you’re looking into, you should prioritize safety above all else. Keep in mind that Leg lengthening can be life-changing and you only get once chance for a successful surgery. Choose wisely