External Fixation Devices (Everything You Need to Know) 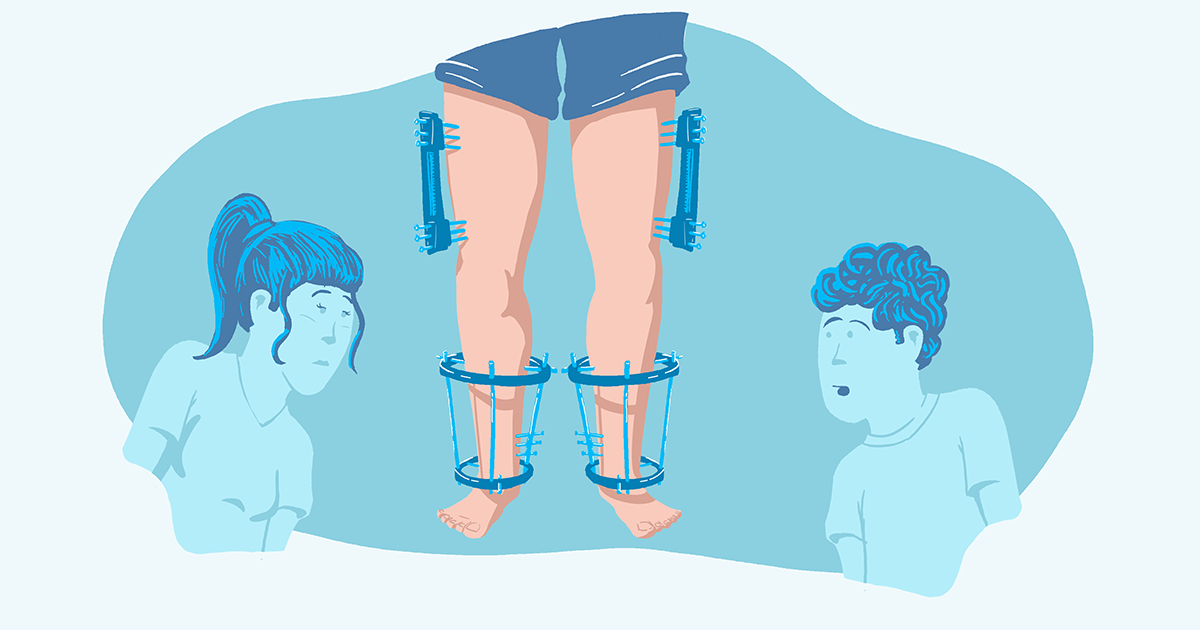 Doctors have long used external fixation devices as a less invasive method to heal fractures and congenital deformities in the bone, like limb length discrepancies. However, surgeons had used them for cosmetic limb lengthening since 1951, when the Ilizarov apparatus, the earliest method of limb lengthening, was invented.

If you’ve used an external fixator for a fracture or are thinking of utilizing one for limb lengthening and want to find out more, keep reading to figure out which is best.

External fixators are attached to the arms or legs with pins or wires going through the bones. Instead of lodging them inside the bone, most of the device remains outside the body, making them more inconvenient than internal fixators but less invasive to install.

The pins and wires utilized in external fixators keep the concerned bone in place so it can heal, while the metal body outside either holds the wires in place. If used for cosmetic limb lengthening, it usually also contains screws that patients can turn to lengthen the bone.

There are a multitude of external fixators used for everything from healing fractures to height surgery. Some are more convenient or less expensive than others, but each has its purpose in orthopedics.

A monorail or monolateral rail fixator consists of a single metal rod, and it remains on the outside of the limb and metal pins that attach to the bone. It’s primarily employed to correct limb length discrepancies or other bone deformities.

A metal bar houses two groups of pins on top of metal blocks. Then a distraction rod rests on top of the metal blocks, connected to a knob.[1] The surgeon makes an incision in the bone and attaches the metal pins to either side. The patient can then turn the knob to move the fragments of bone apart gradually. The rail is left in place until the bone fully heals.

Usually, a monorail fixator is used for cosmetic arm lengthening surgery, as many other methods exist for lengthening the legs. For this surgery, the doctor attaches the rail to the upper bone of the arm or the humerus. It can aid with humeral lengthening of up to 9 cm, especially when correcting arm length deformities.[2]

This method requires the patient to wear the external fixator for only 1/3rd the amount of time as compared to Ilizarov.[3]

Used both for correcting limb length discrepancies and cosmetic limb lengthening, it involves placing a metal nail in the bone marrow. Pins and wires attach to the bone similar to a monorail, never coming in contact with the nail.

The surgeon makes an incision, divides the bone into two, places the nail inside, and attaches the wires. These wires are then attached to the external hardware, consisting of circular or ring external fixators and screws. The patient turns the screws every day to lengthen the bone.

LON is particularly advantageous when the lengthening bones aren’t big enough for a PRECICE or STRYDE nail and can only fit a smaller diameter nail. Once lengthening is complete, the surgeon removes the external fixator.

Lengthening and Then Nailing (LATN)

LATN works very similarly to LON and can correct limb length discrepancies, and it also helps with height surgery. The main difference is that while LON uses a nail during the lengthening and the healing phase, LATN only uses it for the healing phase.[4]

Once lengthening is complete, the surgeon removes the wires and external fixators and inserts a metal nail into the bone marrow. This nail helps keep the bone in place while it heals, allowing external fixator removal earlier than Ilizarov.

A TSF is, simply put, the next generation of an Ilizarov apparatus. It consists of up to four carbon fiber rings connected by six struts or rods, and these struts are then attached to the bone individually by wires.

Each strut in the TSF can lengthen independently of the others. This flexibility means that the surgeon can manipulate the bone in three dimensions instead of only up or down. TSF can alter the angle of the bone, its position, its rotation, and its length.

TSF usually corrects malunions – when a broken bone doesn’t heal correctly at the point of breakage. It also treats acute fractures or congenital limb length discrepancies, and Ilizarov is much more common in limb lengthening.

An Ilizarov apparatus is an assembly of two or three rings placed around the arm or leg. These rings connect to the bone by screws and wires, and these wires are attached to external screws. Additionally, each ring joins with the other with connecting rods.

The surgeon makes a small cut in the bones and threads the wires through the muscle that lies over it. Generally, the patient can begin the lengthening process about a week after the surgery by turning the screws and slowly moving the two sides of the bone apart.

The doctor doesn’t remove the external fixator once lengthening is complete, and it must remain in place till the bone fully heals, putting it at a disadvantage compared to LON and LATN.

External fixation devices come with their pros and cons. Pin site infections are the most significant risks associated with these devices – infections caused at the site where the wire enters the skin. However, the doctor can treat these through timely intervention.

External devices haven’t become less common due to the risk of infections. Instead, it’s because internal fixators tend to be much more convenient and bulky in comparison to internal fixators. External fixators can be cumbersome, and their weight can cause exhaustion and even get in the way of day-to-day activities like carrying things, bathing, sleeping, getting dressed, driving, intimacy, and working.

Though internal fixators eliminate these inconveniences, external devices aren’t going anywhere in the world of deformity and trauma management since they’re tried-and-true methods that are much more affordable than methods like STRYDE and PRECICE. The choice to make the trade-off between affordability and convenience depends on the patients themselves.