Why is Height Shaming Okay in a World of “Body Positivity”? 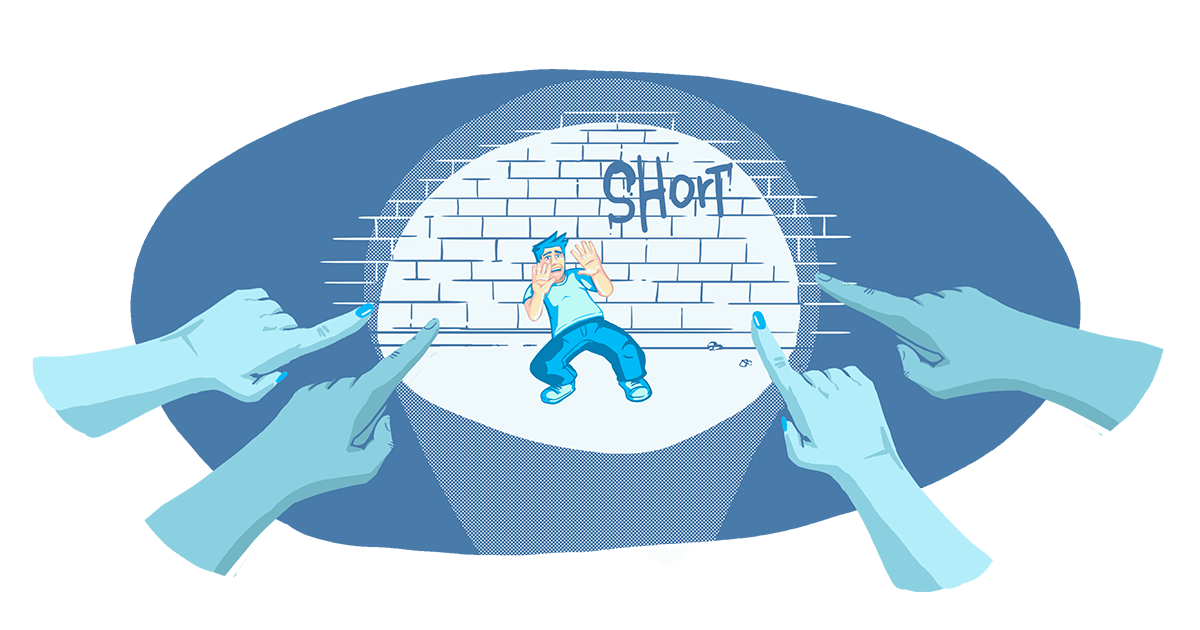 Shaming people based on their height or other physical attributes isn’t anything new and was never okay. Still, for better or for worse, the advent of the body positivity movement and social media has shed new light on the topic.

These two modern movements have highlighted the prejudices people face, but they’ve simultaneously exacerbated the matter by skewing global beauty standards in both directions.

This article will discuss how and why height shaming is generally excluded from the body positivity movement, give readers a new view of body positivity and height discrimination, and how to deal with it.

What is Height Shaming & How Does it Relate to Body Positivity?

Just as it sounds, height shaming refers to the mocking, scrutiny, or shaming of a person for how short or tall they stand. This type of shaming is commonly called height discrimination or heightism and is hardly mentioned in the realm of body positivity.

The body positivity movement was around before the internet was popular, but it originated to fight against weight-shaming.

As it’s gained popularity, body positivity has been preached among many different characteristics such as hairiness, hair color, masculinity, femininity, diseases, and even muscularity or lack thereof.

However, shaming based on height is mostly excluded from typical body positivity partly because many people see it as witty, edgy, or just a preference in the romance world. Additionally, when men are shamed about their height, many outsiders tell them to “man up” and “just accept it,” despite the apparent psychological distress some men face due to their stature.

It’s common knowledge that society frowns at jokes regarding obesity, yet short guy jokes are rampant. The most unfortunate part about this is that height is generally outside of an individual’s control, and there are no natural or nonsurgical methods for an adult to become taller.

Why is Height Shaming So Common Despite Body Positivity?

Height shaming is common because of the internet, height preferences (or requirements), and a pure lack of understanding about the difficulties people of shorter stature face. Body acceptance and positivity only protects certain types of body image issues.

Let’s dig a little deeper to paint the entire picture.

For one, internet trolls prey on the fact that it’s possible to bully and spout nonsense with 0 repercussions for themselves. These anonymous internet trolls have coined many new terms at the sacrifice of others’ well-being.

There’s an entire movement regarding “short kings,” which is quite derogatory since the term in itself implies people of short stature aren’t normally seen as kings, and a separate label had to be created. Even though the term was created with good intentions, it highlights the necessity for others to overcompensate for the shorter population and reinforces social stigmas. On top of anonymity, the rise of social media has shown the world these ultra attractive influencer-type models actually exist. With globalization, beauty standards are raised, and these Instagram superstars are now getting more attention than ever. In combination, this has led people to be pickier when it comes to partner selection and height.

It’s common to see dating profiles exclaim, “If your height doesn’t start with 6′ then don’t message me,” or other remarks that make men of short stature feel inadequate. Again, imagine if people listed weight requirements on their dating profiles and the controversy that would stir. Simply put, body positivity supporters and the rest of the world would be outraged.

The grey line between height requirements and height preferences, along with the other points above, brings us to where we’re at today. Sure, it’s human nature to have preferences (whether that’s height or weight preferences), but putting people down due to either should not be accepted in a world of body positivity. Even in the workplace, it’s common for people to have preferences or unconscious biases that strongly prefer people of taller stature since they’re generally viewed as more dominant, trustworthy, intelligent, and capable.

Conscious and unconscious biases alike will always be a part of human nature and should be recognized, but the truth is, height biases are ingrained in society and usually taken lightly since they are generally deeply rooted in our culture.

What Are The Effects & Implications of Height Shaming

Discriminating against someone due to their stature or height has brought out a myriad of mental battles among the masses.

While fundamentally different terms, BDD (body dysmorphic disorder) and height dysphoria (dissatisfaction with one’s height) overlap in many ways. One of which is they’re becoming more widespread due to globalized beauty standards, the jokes that come with anonymous posting, and pure disregard for others’ well-being.

Stature shaming is simply another form of genetic discrimination, even though it’s far less recognized in legislation. This sort of shaming can cause:

How to Deal With & Overcome Height Shaming?

There are multiple approaches, while some are more practical than others.

One can argue that love and self-acceptance can be improved, so height-hating remarks don’t cause psychological distress. Essentially telling people they should be okay with it despite infinite self love or their feelings being hurt. Nevertheless, these words can still sting depending on the scenario and how well one responds to treatment. It’s always a good idea to work on these two factors and seek therapy if others’ words or actions are detrimental to an individual’s mental health. Cognitive-behavioral therapy and perceptual control theory may be beneficial, but not one solution will work for everyone.

There’s also the option of removing the toxic people or avoiding settings where people are judgmental based on stature. For example, if a person’s aunt will not stop calling them “little man” when they’re a full-grown adult, this person may sever ties with their aunt if it’s best for their mental well-being. Or, if someone gets similar remarks on the basketball court, they can always go to another recreation center or pick up another sport.

One might also look into heel lifts, elevator shoes, and improving their posture to appear taller in social situations. However, this is more of a temporary fix. Or, doubling down on one’s strengths can bring out the best of one’s personality and help develop their best traits.

As a society, we’re a long way from viewing height shaming in the same way as other body positivity characteristics.  Maybe a movement of height acceptance is next, but who knows.

In the meantime, one can try some of the things above to mitigate any turmoil that comes along with others’ words or behaviors.

As always, please speak to a healthcare professional if you believe you or a loved one faces difficulties surrounding height.