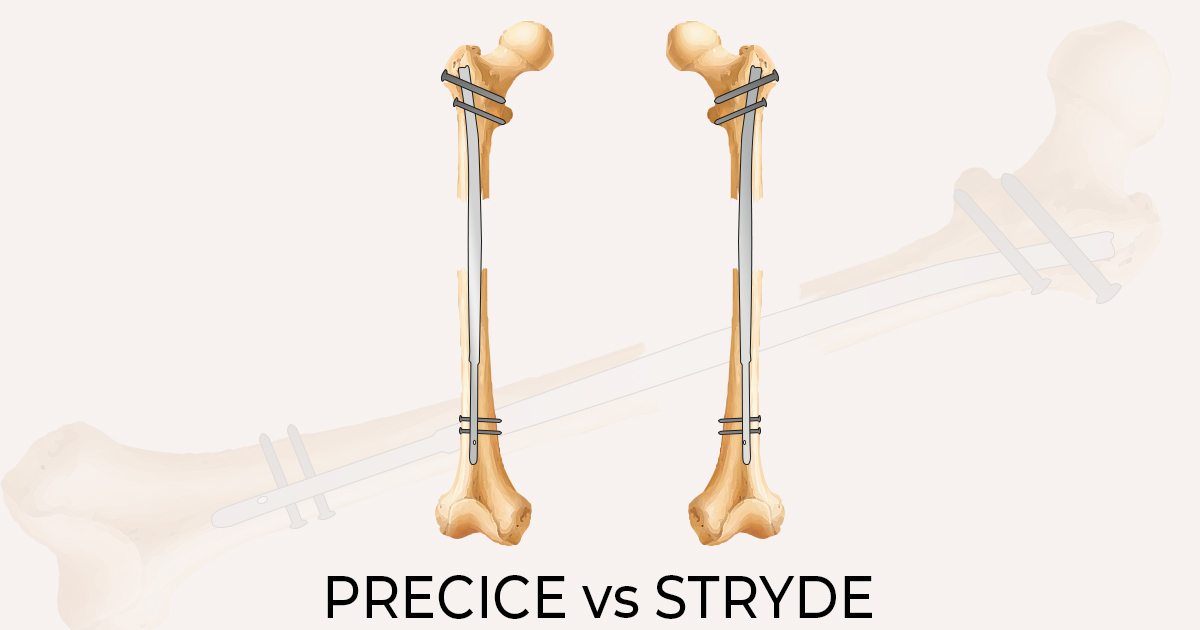 Internal nails such as the PRECICE 2 vs PRECICE STRYDE have similar names and appearances, but a few key differences make STRYDE the superior nail despite the voluntary recall.

This bears the question, what makes STRYDE better, is it worth waiting, and is the PRECICE 2 nail sufficient?

An Overview of Intramedullary Nails Such as PRECICE 2 & STRYDE

To truly understand the differences between PRECICE and STRYDE, we need to look at past nails’ downsides.

The advent of intramedullary nails helped to revolutionize the process of limb lengthening and while such nails have been around for several years, only recently have the use of internal nails become practical.

Previously, some internal nails may have been mechanical and required activation by the patient via turning the leg at a particular angle or laterally raising the limb. This was true for the Albizzia and Bliskunov nails, but these methods of lengthening were painful, traumatic, and subject to human error due to the mechanical ratcheting.[1]

Another one of the pioneers of intramedullary devices is known as Fitbone[2]. This mechanism is very similar to the well-accepted procedures done today with the exception that it was not as fully internalized as today’s models and required the use of an electric current to activate the nails. Not to mention, there are countless stories of the Fitbone and past internal nails breaking under the weight.

Many of these common issues were resolved with the evolution of the PRECICE nail system, which uses an electromagnetic field to extend the nail so the lengthening can be easily measured. In addition to being stronger and made in several different sizes, it’s also suited for shorter or slimmer bones.

The STRYDE nail upped the ante by switching to a stainless steel version, which means a greater weight-bearing capacity. It eliminated the necessity to remove the nail immediately following the lengthening process (it should still be removed within two years).

The PRECICE 2 method of bilateral limb lengthening was first completed in 2013 and implanted by the renowned Dr. Paley of the Paley Institute. It completely revolutionized such procedures and remained the gold standard until it was eventually superseded by the PRECICE STRYDE method.

The PRECICE 2 was an upgrade to the previous PRECICE 1 method, being made with titanium which means it is 400% stronger than the original PRECICE nail.

Following five years of clinical studies, the PRECICE STRYDE system was released by NuVasive Specialized Orthopedics, the same company that had previously released the PRECICE 2 system.

The STRYDE nail was created with nearly the same design as PRECICE, but they used a more resilient metal like steel rather than titanium. The new stainless steel nails allow a weight-bearing capacity of 150 to 250 pounds per leg when the titanium-based nails of the older system could only bear 30 to 50 pounds per leg.

The device remained well accepted until the company issued a voluntary recall of the product in July 2021 based on reports of pain, bony abnormalities, and corrosion. [3]

The STRYDE 2 system is set to return to the market in late 2021 or 2022, so some patients are contemplating delaying their surgery for the next iteration of STRYDE.

It may not seem like the STRYDE nail has many benefits over PRECICE, but the benefits of being fully weight-bearing cascade on one another. For example, when the patient can bear their full weight, they can walk days after surgery. If patients can walk, they can maintain stretch, which ultimately allows them to recover 1.5x-2x as quickly.

PRECICE VS STRYDE HEAD TO HEAD

If you’re on the fence about deciding which is the best option for you, the table below can help you visualize both of them side-by-side.

How Much Of An Increase In Height Can I Expect?

You can gain as much as 6.3 inches in height if you are willing to undergo three surgeries to get there (excluding the rod or nail removal, which is a minor procedure). However, most patients gain anywhere from 2-4 inches between 1-2 surgeries (excluding nail removal).

As a general rule of thumb, it is not a good idea to extend the length of a single bone by more than 8 cm. If an increase greater than this is desired, a more practical approach would be to increase the length of two bones, the femurs and tibias by 5 cm each.

Should I Wait for STRYDE 2 or is PRECICE 2 Good Enough?

As a famous surgeon once said, there will always be advancements in limb lengthening devices, so if you’re always waiting for the next big thing, you might be delaying the procedure indefinitely.

STRYDE is surely better than PRECICE 2, but no one knows when STRYDE 2 will be released, and you could be halfway done lengthening or a few inches taller by the time STRYDE 2 is released. Not to mention PRECICE 2 has years of success behind it, so it’s proven its safety and effectiveness.

All in all, PRECICE isn’t as good, but it is more than enough and still a fantastic nail overall.

PRECICE 2 vs STRYDE: The Verdict

When comparing PRECICE 2 to STRYDE, it’s clear STRYDE is superior in every way, except for the higher price tag and current recall. If you can afford it and don’t mind waiting a bit for when it reenters the market, then STRYDE is the clear winner when it comes to height surgery.

However, that doesn’t mean that you should discount the PRECICE 2’s prowess since it has an excellent track record of its own and was the gold standard of years past.