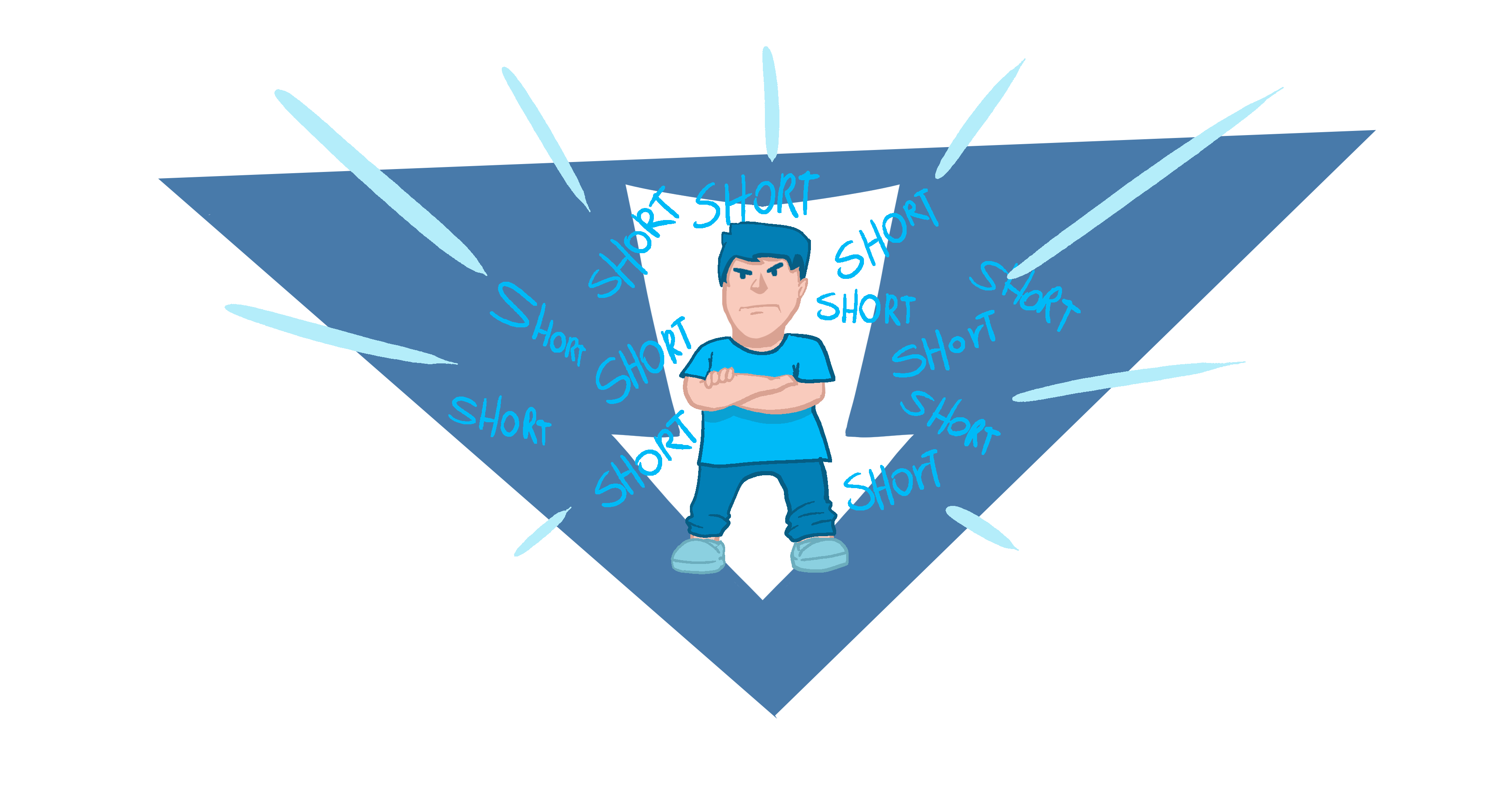 When Napoleon comes up in conversation, the first thing many people think of is his height! He was known to be a short, aggressive man, which might not even be accurate, but many people claim to know people with short man syndrome – where short men have exceptionally short tempers to supposedly compensate for their lack of height or insecurities. This phenomenon is often said to be a myth, but could it be based on fact?

If you’re worried you might be exhibiting signs of this syndrome or are just wondering if it’s a real thing, continue below to learn about the research surrounding the phenomenon.

A man is said to have short, small or little man syndrome when he compensates for his perceived lack of height through violent, aggressive, or selfish behavior. He doesn’t necessarily have to be short – he has to “feel small” to suffer from the need to overcompensate with traditionally “manly” traits.

People believe that short men are more prone to flashy and aggressive behavior to prove worth beyond their stature. They can even become obsessive over it, thinking about their height at all times of the day and preventing themselves from forming healthy relationships.

At the point of obsession, this syndrome might become height dysphoria or neurosis. Here, a person is in constant distress over their height and may be prone to lashing out, like men getting angry with girlfriends who wear heels and end up looking taller than them.

Where Does Napoleon Come In?

Interestingly, people also know small man syndrome as Napoleon complex or Napoleon syndrome. This name comes from the first French emperor, Napoleon Bonaparte, who built the most widespread empire since the Romans. He was a master of war and conquest, but the most prominent of his features we remember was that he was short, according to the British.

Allegedly, when one of Napoleon’s military commanders told him that he felt uncomfortable being so much taller than the ruler, Napoleon replied, “You may be taller, but I am greater.”[2] This quote seems to give credence to the claim that Napoleon fought wars to show his worth beyond his height.

Moreover, the British painted him as short in propaganda campaigns due to their rivalry with him. Since the British had an all-encompassing influence over the world during colonial times, the image of the puny French Emperor has endured till today.

This “fact” is not accurate, though – Napoleon stood at 5 feet 7 inches, which may seem short by today’s standards but was above the average male height at the time![3] Besides, he usually traveled with his Imperial Guard, which consisted of taller-than-average men, making him look shorter in comparison.

Why Would Men Want to be Taller?

Tall people enjoy many benefits in today’s society and many short men are obsessed with the benefits people of tall stature reap. Not only do they earn more, with annual earnings increasing by 10-13% per extra centimeter of height,[4] but people also see them as more socially dominant[5] and they’re much less likely to become a target of appearance-based bullying.

More tall people also hold positions of power than short people,[6] and not only do men feel taller at a higher status position,[2] but tall men are also more often assumed to have a high status.[7] Because of these reasons, they end up being happier than their shorter counterparts on average.[8]

Apart from financial advantages, women also find taller men to be more attractive. Most women prefer men to be about 21 cm taller than themselves,[9] and the average woman wants a man at least an inch or two above average.[10] Many women won’t date a man below 5’3″.[10]

All of these reasons and more are why some men of shorter stature face psychological turmoil when it comes to their height.

Height-based discrimination, or heightism, can make men depressed and overly self-conscious about their height. Even men who aren’t very short, may feel short if they don’t live up to their standards for stature. For one reason or another, men who are dissatisfied with their stature may be suffering from height dysphoria.

This mismatch in perception can cause them a lot of distress every day. So, it’s no wonder if men who perceive themselves as short try to compensate for their height with their financial achievements or by appearing “macho” through aggressive acts.

Is Short Man Syndrome a Myth?

Another study that followed school children into adulthood found no difference in daily functioning that researchers could attribute to height.[12]

Other studies, however, have found that shorter men do exhibit more aggressive behaviors and anger problems than their peers of taller stature.

In a survey of 600 US men, CDC researchers in Atlanta found that men who feel the least masculine are more prone to committing violent acts. These men might suffer from male discrepancy stress when they think they can’t fulfill the traditional notion of masculine gender norms.[13]

Men who felt masculine but were comfortable in their skin were the least prone to violent acts, like an assault with a weapon or assault leading to injury. Which goes to say, if someone is comfortable in their own skin, then there’s not necessarily a correlation between physical attributes and violence.

The researchers also found that there wasn’t any such correlation between drug and alcohol abuse and male discrepancy stress (when a man feels he isn’t masculine enough), indicating that most of these violent behaviors are a performance of masculine prowess.

Multiple studies have been done on the Napoleon complex, but their findings often contradict each other due to varying parameters and methodologies. Still, it does seem as though the disadvantages faced by short men in today’s society compel them to want to prove themselves.

However, this might not be because they’re short but because they feel inadequate. This feeling of inadequacy may translate into what people see as the symptoms of little man syndrome.

Perceiving oneself as small, whether by one’s standards or in comparison to others, has a much more significant impact on behavior than actually being below average height.

Researchers at the University of Groningen claim that 5’4″ men are 50% more likely to feel jealous than 6’6″ men.[14] Following this, it’s not surprising that shorter men behave more covertly aggressive with taller men, especially when there are no consequences.

At Vrije University, evolutionary psychologists carried out a study that made participants play two games – the dictator game and the ultimatum game.[15]

In the first iteration of the dictator game, participants weren’t allowed to see each other. They were given envelopes containing eight €1 coins and told they could take home as many as they liked, and whatever they left behind would be provided to other participants.

Apart from the game, researchers also asked them the question, “Did you ever feel small?” They noted that the smaller a participant felt, the more likely they would take more coins with them. Note that there was hardly any correlation between height and the feeling of being small.

In a second iteration, when shorter participants were paired with taller participants and allowed a 10-second introduction time to see and talk to each other, short men were much more likely to be indirectly aggressive to taller men.

Both participants got 18 coins each, and the researchers told them to keep as many as they liked, leaving the rest for the other participant. Here, the shorter men were placed in a position of power (that of the allocator of coins), though they didn’t know the taller men had this power too.

Being in an authoritative position, shorter men (5’6″ and below) kept 14 coins on average, while the tallest men (about 6’6″) only kept 9. This discrepancy indicated that shorter men show indirect aggression when consequences don’t hang in the balance.

In the ultimatum game, however, participants were told that their opponent would have to accept or reject the number of coins they gave them. This time, there wasn’t much difference between the number of coins kept by shorter and taller men, indicating that the introduction of consequences mitigates most Napoleon complex behaviors.

How Can This Be Explained?

The researchers theorized that they could explain this discrepancy because men played the role of protectors in ancient times. Since their strength would attract women, men who feel disadvantaged in front of taller men, who they perceive as more masculine, employ tactics like abusing their power to gain more resources.[15]

This theory is consistent with what people think of Napoleon’s wars, but it’s evident that feeling small is more impactful than being short. However, not all short men can be assumed to have this syndrome.

No matter what side the science falls on, it wouldn’t be fair to generalize all short men as angry and miserable. Though there’s a higher chance of a tall person being self-confident, many short people are comfortable in their skin. Not only are they self-confident, they’ve made a good life and career for themselves.

Men like Tom Holland, the actor who plays Spiderman in Marvel’s Avengers and Spiderman movies, stands proud at 5’7″, and no one can bat an eye at his success! The same goes for Hollywood personalities like Kevin Hart (about 5’3″) and Martin Freeman (5’4″), who starred as John Watson in the TV series Sherlock.

Combine a confident short man who has a good dressing sense and a sense of humor, and any man, regardless of his height, can steal hearts.

The best way to mitigate this syndrome is through introspection or various forms of therapy. It’s important to realize that respect, love, and financial success isn’t solely dependent on height – it’s just one factor that’s correlated with them.

A person’s personality and actions are much more likely to earn them respect long-term than looking tall. Similarly, hard work and education are much more reliable indicators of financial success than height.

The same goes for women – romantic attraction isn’t simply a function of finding a combination of traits one likes as a robot would do. Still, it’s dependent on a myriad of factors that we don’t even recognize. People fall in love despite their flaws, and there’s no rule that women are attracted only to tall guys!

Another way is self-improvement – improve the parts of you that you can change, like going to the gym to develop a better physique or taking some courses in a skill you’ve always wanted to learn. Improving yourself in other ways can mitigate the feeling of inadequacy and, thus, short man syndrome.

If you don’t suffer from this syndrome but know someone who does, like a friend or family member, it’s a good idea to be supportive so they can get to the root of the issue. If dealing with them starts affecting you negatively most of the time, feel free to wish them well and distance yourself because you can’t help someone who won’t help themselves.