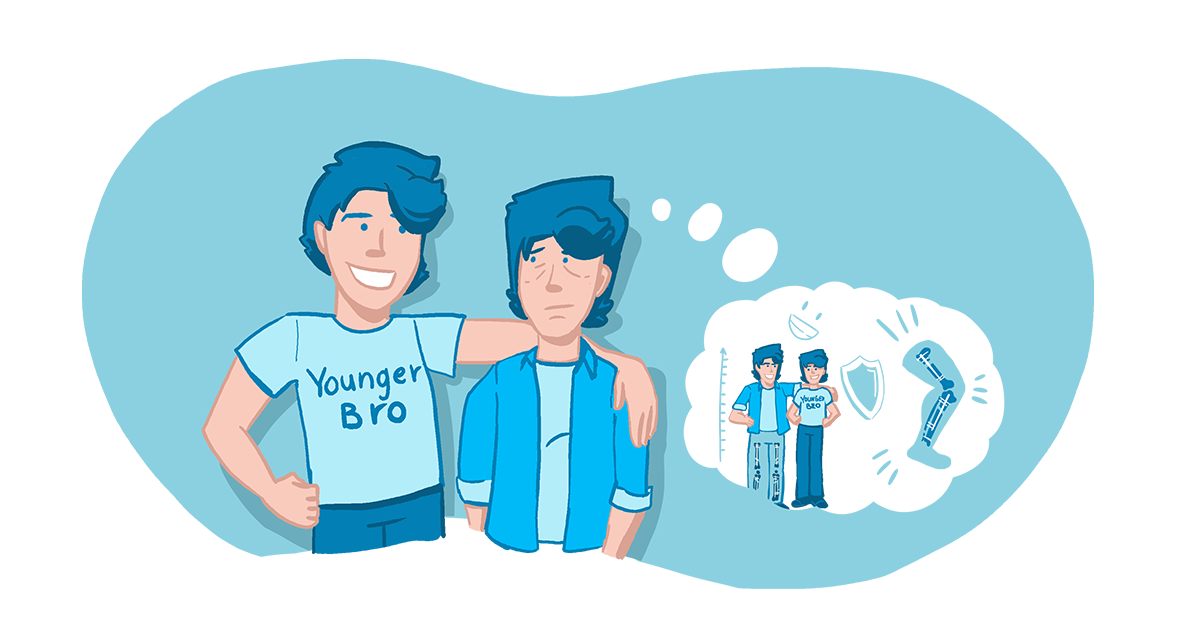 It can be strange when a taller younger brother towers over you, but this can be a blessing or curse, depending on the dynamic.

From anecdotal observations, it seems the younger brother is either very protective or friendly, somewhat of a bully, or somewhere in between. On top of that, other people expect the shorter brother to be the shortest, and this can be annoying too.

Today we’ll break down some of the benefits, problems, reasons for smaller statures, and potential solutions of being the older but shorter brother.

Being Mistaken For The Younger Sibling

Being approached by a stranger who assumes your younger brother as the elder could feel awkward or annoying because of their height advantage. This can get old quickly; a potential solution is to exclaim that you’re the younger before they can assume.

If they make any remarks about the height difference, you can either shrug it off or express how you feel, depending on the situation.

Not Seeing Eye to Eye (Conflict)

Sure, you two may not see eye to eye in a literal sense, but even then, people never share the exact same outlook since we are all unique individuals. What your taller younger brother might deem offensive or excusable depends entirely on his view developed throughout his life and personal experiences.

Being taller might mean that he didn’t experience bullying to a similar degree as you might have, and thus he holds a different outlook in that regard. An experience you view as being physically or psychologically dominating might register as being playful in his mind.

How could such conflict be resolved?

The best way to deal with and prevent such issues is to make your feelings known to your sibling in a caring manner. It’s ok to disagree and have debates. Just be sure they don’t turn into emotionally fueled arguments.

For physical conflicts, always avoid fighting if you can, and you can see things escalating, find your parents as soon as possible. If your situation doesn’t allow for either of these approaches, you should look to your school counselor for future assistance.

Are There Benefits of Being a Shorter Elder Sibling?

Being an older but shorter brother could be considered a benefit to be mistaken for the younger sibling since the older sibling is usually assigned more chores or tasks by their elders. Not to mention, as you age, this could be positive as looking younger becomes a compliment in your mid 20’s.

Taller Younger Brother Can Be Your Personal Bodyguard

Most siblings are happy to benefit from a taller brother who can come to their defense! It’s not always this simple, such as in the case of two brothers where the older brother is being picked on, the younger brother may act as the ‘bigger’ brother who stands up for his shorter yet older brother.

When you and your sibling find yourselves in a crowded place such as a sports stadium, gaming convention, music festival, or even a gathering for a political movement, height can be used to either of your advantages. The taller sibling will be able to lead you to your destination since the crowds part ways due to his tall stature. You can also locate a taller sibling in the crowd much easier since they stick out like a sore thumb.

Why Am I Shorter Than My Young Brother

Genetics are responsible for 80% of someone’s natural height, yet some studies suggest firstborns tend to be the tallest [1]. Outside environmental factors such as sleep, nutrition, and exercise make up the remaining 20% of what determines an individual’s height.

As humans, we’re born social creatures who try our best to fit in, and as the older brother being shorter might not feel great or be fun at times, but trying to fight the fact internally does more harm than good.

If you are still upset that your taller younger brother stands above you, discussing these feelings with a healthcare professional can be beneficial.