Should I Lengthen Femurs or Tibias First? Does it Even Matter? 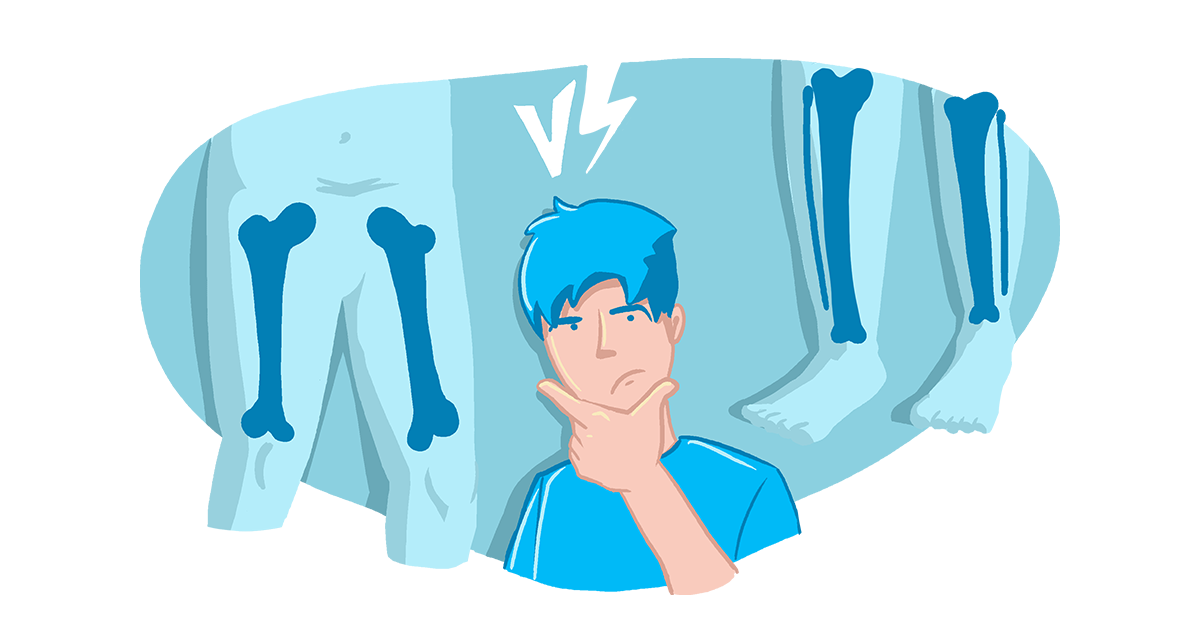 Many limb lengthening candidates wonder if they should get surgery on their femurs or tibias first. The fact is, it entirely depends on how much height they need to gain, their leg proportions, amount of free time they have and how much they’re willing to spend.

Below, we’ll discuss the pros and cons of just lengthening the femurs or the tibias. As well as which one you might consider doing first, if you decide to lengthen both.

Whatever you decide to go with, always follow the doctor’s orders as no height gain is more important than your health and safety.

Femur lengthening generally comes out to be cheaper than tibia lengthening, both in terms of immediate surgery costs and money spent on recovery.

At the Paley Institute, patients have five options for lengthening with Precice STRYDE (including physical therapy post-surgery and rod removal).[1] Various doctors will have difference pricing, but no matter who you go with, these prices give you an idea of %’s between different segment and surgery options.

It’s clear that lengthening only the femur costs at least $11,500 less than tibia lengthening, and all options, including extending the tibias, are much more expensive. If money is a significant concern, femur surgery might be the best option and there’s a few qualified doctors who perform the surgery for less than the above as well.

Time is something we’ll never get back and outside of taking time off from work, this surgery can impede on vacations, dating life, and the healing or consolidation period comes with a fair amount of pain for most.

In general, femurs heal about two times faster than tibias. Femurs require only one month of healing per centimeter of length instead of the two months per centimeter required by tibias.[2]

To put that into perspective, this means that if a patient lengthens their femurs by 4 cm, they’ll only require about four months of consolidation time while needing eight months for the same height gain in the tibias.

With the STRYDE nail, patients won’t need to use a walker throughout the entire consolidation or healing process, but with the Precice 2.2 they will require walking assistance such as a walker, crutches, or a cane through all of the healing period.

To avoid strain on their employer, family, their business, or even themselves, many patients opt for femur lengthening only, but this doesn’t take into account proportions, scars, or costs.

Femur lengthening is safer than tibia lengthening since doctors only need to break and distract the femur. To lengthen tibias, the fibulas, the thinner bones beside the tibias, need to be extended as well, creating a greater risk of fractures, malunions (improper healing of the two parts of the bone), and nonunions (when the two parts don’t consolidate and join again).

If someone chooses tibia lengthening, it’s vital to choose a reputable surgeon with tons of experience because of the additional complexities.

While it may not be a consideration for everyone, many leg lengthening patients might be conscious of their height, proportions, and post-surgery appearance.

The average person has a tibia to femur ratio of 0.80 with a standard deviation of 0.02, which means this ratio varies typically between 0.78-0.82.[3] Though this ratio doesn’t always affect how attractive others might find a person, it’s fair to consider it.[4]

The only way to accurately determine the length of the femur and the tibia is to get an x-ray measurement. If a patient is going in for limb lengthening, the surgeon will perform this scan, also known as an EOS scan, and let them know which surgery would be best for them.

Generally, suppose the tibia to femur ratio is within the normal range or higher than 0.82. In that case, femur lengthening may be preferable, and if it’s below 0.78, tibia lengthening might be the right option. The surgeon will also consider discrepancies in length caused by fractures or other injuries that occurred during adolescence, which might cause one femur or tibia to be significantly shorter than the other.

For tibia lengthening, the scars typically appear on the front of the calves and are visible if the patient wears shorts. So, if they live somewhere hot and don’t want friends and family to know about their surgery, tibia lengthening might not be the best option.

During femur lengthening, the thigh will bear any scars caused by both rod placement and removal. Since most people cover their upper thighs with clothing, these scars would only be an issue in situations like the swimming pool or beach.

Scars will fade with time, though, and plastic surgery and laser removal can also remove them, which means this shouldn’t be the only deciding factor.

If a patient is looking to gain height fast, lengthening the femur might be their best bet. Femurs can be extended by 8 cm (about 3 inches) at once,[5] while tibias can only safely gain 5 cm (a little less than 2 inches).[1]

If a patient wants the cheapest and safest option, again, femurs should be considered if they are only lengthening one segment.

When a bone lengthens too much, the muscle can’t keep up with it.[6] This discrepancy can cause side effects like muscle contractures and stiffness even while following the correct stretches and exercises every day. Contractures restrict muscle movement to the point that knee movement is severely impaired too.

Femurs can also be lengthened twice with a much shorter gap between the two surgeries since they recover faster.

Many patients opt to have their femurs lengthened first so afterwards, they can assess whether they’d like their tibias lengthened too. If they’re set on getting both bones or segments elongated in a short amount of time (quadrilateral), then surgeons will typically operate on the tibia first to give them a head start in the healing process since they take a longer time to heal.

In the end, only your surgeon can tell you how many surgeries you will need to achieve your height goals and which surgery you should get done first.