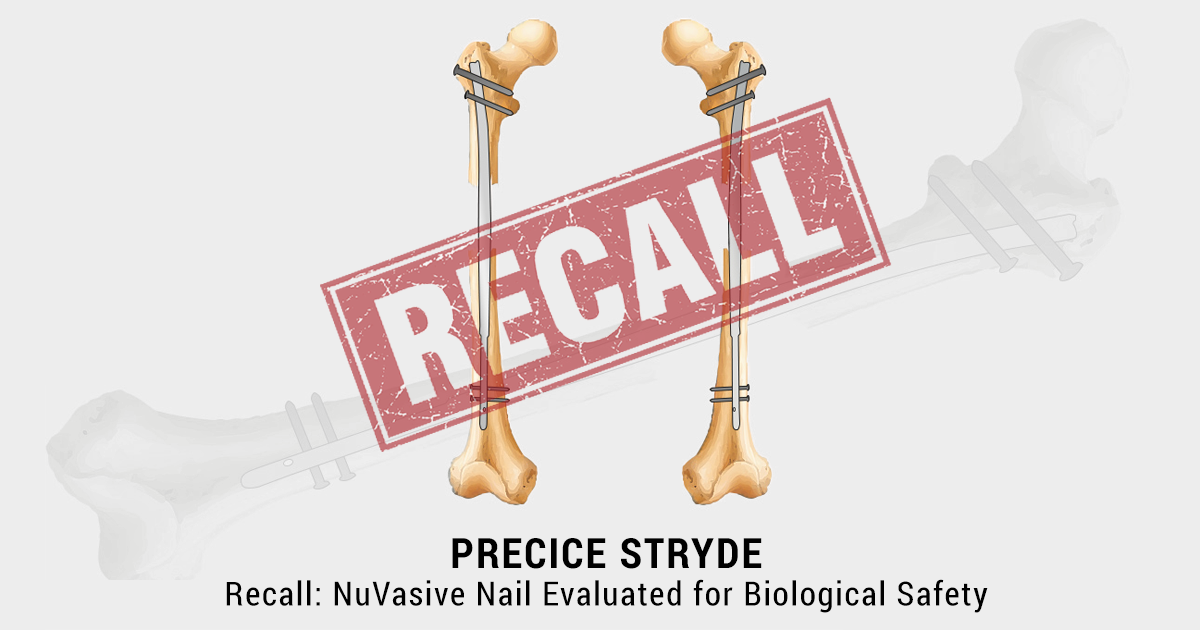 The PRECICE STRYDE limb lengthening device was recalled in the UK in January of this year, followed by a voluntary recall in February in the USA. This may sound scary, but it’s great news Nuvasive is re-evaluating STRYDE proactively rather than waiting for a disaster. Don’t worry – we’ll explain what exactly is happening and the next best options available.

Why Was the STRYDE Nail Recalled?

According to Dr. Dror Paley, head of Paley Orthopedic and Spine Institute and inventor of PRECICE as well as STRYDE, a patient in the UK had complained of pain in her bones. When her surgeon investigated, he found changes in her bone structure around the telescopic junction of the nail[1].

The STRYDE nail was removed, and corrosion was found at the junction of the male and female sections. This finding, combined with reports of bony abnormalities and soft tissue changes, caused concerns over pain and even the possibility of cancer.

This prompted the MHRA to get NSO involved, leading to a voluntary recall of all PRECICE devices, including titanium devices, for biocompatibility testing in the UK[2].

In the USA, the FDA also contacted NSO, and a voluntary recall of the stainless steel devices was issued. This includes the STRYDE nail, the PRECICE Plate, and the PRECICE Bone Transport. NSO has also recently stopped shipping titanium devices, including the PRECICE Nail, to the USA, but they haven’t been removed from the market[3].

Is the STRYDE Nail Really Carcinogenic?

No concrete evidence has been found for STRYDE being carcinogenic. The corrosion of the nail raised questions of whether it could cause cancer, but Dr Paley has not witnessed a single case of cancer that has developed from such corrosion since 2018[1].

According to Dr Paley, such corrosion is normal. If the stainless steel rod is bent even slightly by the weight put on it by the body, it can cause a minor breakdown of the nickel in the stainless steel alloy. This leads to rusting or corrosion, and it isn’t seen as an indicator of carcinogenicity.

I Already Have the STRYDE Nail – Am I in Danger?

The STRYDE nail has proven sturdy, but always speak to your doctor if you’re concerned about the rod corroding. As far as breakage goes, Dr. Paley conducted a study where 122 cases with over a year of radiographic X-Rays were examined:

· 21% showed a combination of hypertrophic and lytic changes[1]

Dr. Paley notes that these changes occur majorly at the junction as well as the site where the nail is affixed with screws. However, only lytic changes can be considered harmful, yet there isn’t any evidence of fractures caused by lysis.

Hypertrophy only serves to make bones thicker and, consequently, stronger. Hence, there’s no need to lose sleep over the effects of STRYDE if you already have it. Just be sure to attend regular check-ups and follow your doctor’s advice.

When Will STRYDE Be Available Again?

As of February, NSO has stated in a Field Safety Notice that it is currently conducting tests to determine the “carcinogenicity, chronic toxicity, developmental toxicity, and reproductive toxicity” of the recalled devices[4].

The secondary goal is to figure out whether the current concerns are caused by STRYDE being made of Biodur stainless steel or if it’s something that can be found in titanium-based devices. However, the FDA has stated that there haven’t been any unexpected issues with the titanium PRECICE nail.

Considering this, STRYDE is estimated to be available again by September 2021[5] at the earliest. However, it may not be back on the market until January or even later if issues are found that require solutions, such as coating the device with polyethylene.

Is the PRECICE Nail as Good?

The PRECICE nail has been in use for cosmetic limb lengthening since 2011 and has been implanted more than 1,500 times. Considering this, it has a much more solid track record when it comes to safety. It’s generally cheaper, too, so PRECICE is undoubtedly worth giving a try.

The downsides to the PRECICE nail mainly pertain to weaker weight-bearing capabilities and slower recovery. Since the STRYDE nail is designed to be fully weight-bearing even during the lengthening or distraction phase, it’s generally a much more convenient option.

PRECICE might not be fully weight-bearing, but the choice ultimately comes down to individual convenience. If you’re considering this surgery, the lengthening process may outweigh the inconvenience of using crutches or a wheelchair.

The success rate of PRECICE is almost 100%[6]. Since PRECICE produces similar results as STRYDE and is still available in the US market, the best course of action would be to talk to your surgeon and decide what would be ideal for you.