What Height is Considered Short? (For Men and Women) 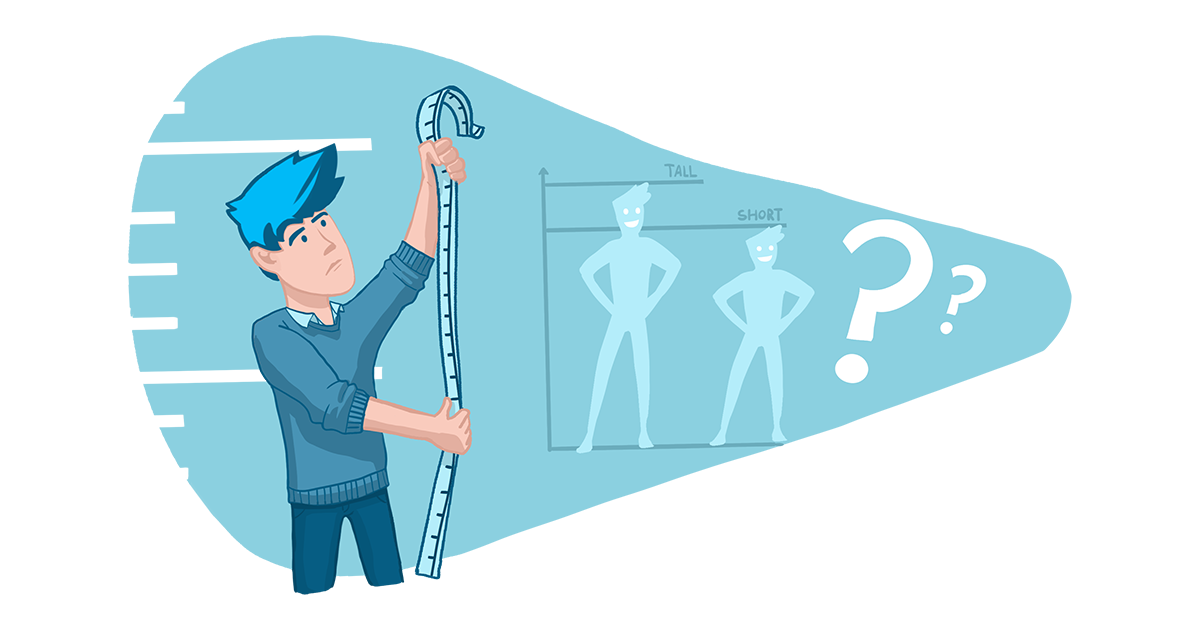 Whether they want to look like a Marvel hero or a supermodel, both men and women often wish to be taller. What height is considered short, though? While there’s no objective way to establish a height threshold, there are a few ways, such as physical geography, to estimate whether peers see you as short.

What’s viewed as short in one region may be tall in another, so it’s not always black and white. For instance, the US average height is 168.3 cm (5’6), so if an American visited India, where the average height is 158.5 cm (5’2), they would be considered well above average stature.

This doesn’t even take into account an individuals personal perceptions of others where someone who has a tall social circle will see anyone under 6’ as short.

Technically speaking, if one is 1 standard deviation shorter than the world average, then they could be considered “short”, but this is by far the best way to approach the question of “what’s considered short?”.

The worldwide average height for men is 5 feet 7.5 inches. Are men below this threshold considered short, then? It depends on where one is in the world – in the Philippines, the average male height is only 5 feet 3 inches, while it’s 6 feet in the Netherlands! A 5’7″ man may be very tall in the Philippines, but women from the Netherlands consider him relatively short.

The average height for men in the US is 5’9″, but it’s not uncommon to see women express a desire for a man no shorter than 6 feet. A study in the UK also found that women consider 5’11” to be the ideal height, the average male height in the UK being 5’10”.

Am I Short as a Man?

Being below the norm doesn’t mean a person is necessarily short. Since the “ideal” height runs quite close to the average in the western world, though, it would be fair to say a man below 5’4″ is generally seen as short in the west.

What Height is Tall for Men?

Being above the average US height of 5’9″ isn’t enough to be objectively tall. Since British women prefer men at 5’11”, that’s considered sufficiently tall for men in that region. Statistically, a height of 6 feet is one standard deviation above the average US male height, so men 6 feet and above are undoubtedly tall.

Men above 6’3″ are seen as very tall – they may even be too tall for many women since they would be about a foot taller than the average woman.

Most men prefer to date women shorter than them, giving women much more leeway with height. The UK study, which found the ideal height for men to be 5’11”, also found that the perfect height for women is 5’6″. Are women below 5’6″ considered short in the west, then?

95% of women are between 5 feet and 5’11”, which means women below 5 feet are rare and considered relatively short in the western world. However, this limit isn’t necessarily a universal standard – while some men believe there’s no such thing as too short for a woman. Statistically, it depends on her race and nationality.

The average US woman is 5 feet 4 inches, and the average woman in the Netherlands is 5’5.5″, while the average Indian woman is only slightly taller than 5 feet. This difference indicates that the average female height varies greatly worldwide.

Am I Short For a Woman?

Leg to body ratio matters much more for women, though – longer legs are a reliable indicator of childhood nutrition, correlating with higher fertility. Men rate women with a higher leg-to-body ratio as more attractive, with most models and actresses having gorgeous long legs.

What Height is Tall for Women?

In a romantic situation, men prefer women shorter than them. Since the average man is 5’7.5″ worldwide, most men would see a 5’8″ woman as tall. In the US, a 5’9″ woman will be similarly considered tall.

Statistically, too, women 5’7″ and above are one standard deviation over the US average, such that most people would consider them tall. Women 6 feet and taller surpass 95% of their gender in terms of height, making them inarguably tall – perhaps too tall.

A reliable way to determine whether a man or a woman is considered tall is to compare them with the country’s average height. If they’re at least one standard deviation above the average, they’re very likely to be considered tall.

One should keep in mind, however, that while the categories of “tall”, “short”, and “average” may have data backing them up, individual people aren’t programmed to run on data and statistics. In the end, whether a person is tall or short depends entirely on the other person perceiving them.

A 4’11” woman would may find a 6’1″ man too tall for comfort, and the same man would may find her too short for his preferences. On the other hand, both of them could see each other as incredibly attractive, too – one never knows what a person’s personal preference may be, and personality plays a huge role in attraction as well.

If you’re still unsatisfied with your height and it causes you severe distress, you may want to consult a therapist. If nothing else works, individuals may consider limb lengthening surgery as an alternative. Though this surgery is expensive, time-consuming, and comes with risks, it can increase height by 2 – 6.3 inches or more at a time.