What Height Is Tall? (Statistics, Explanation, and Discussion) 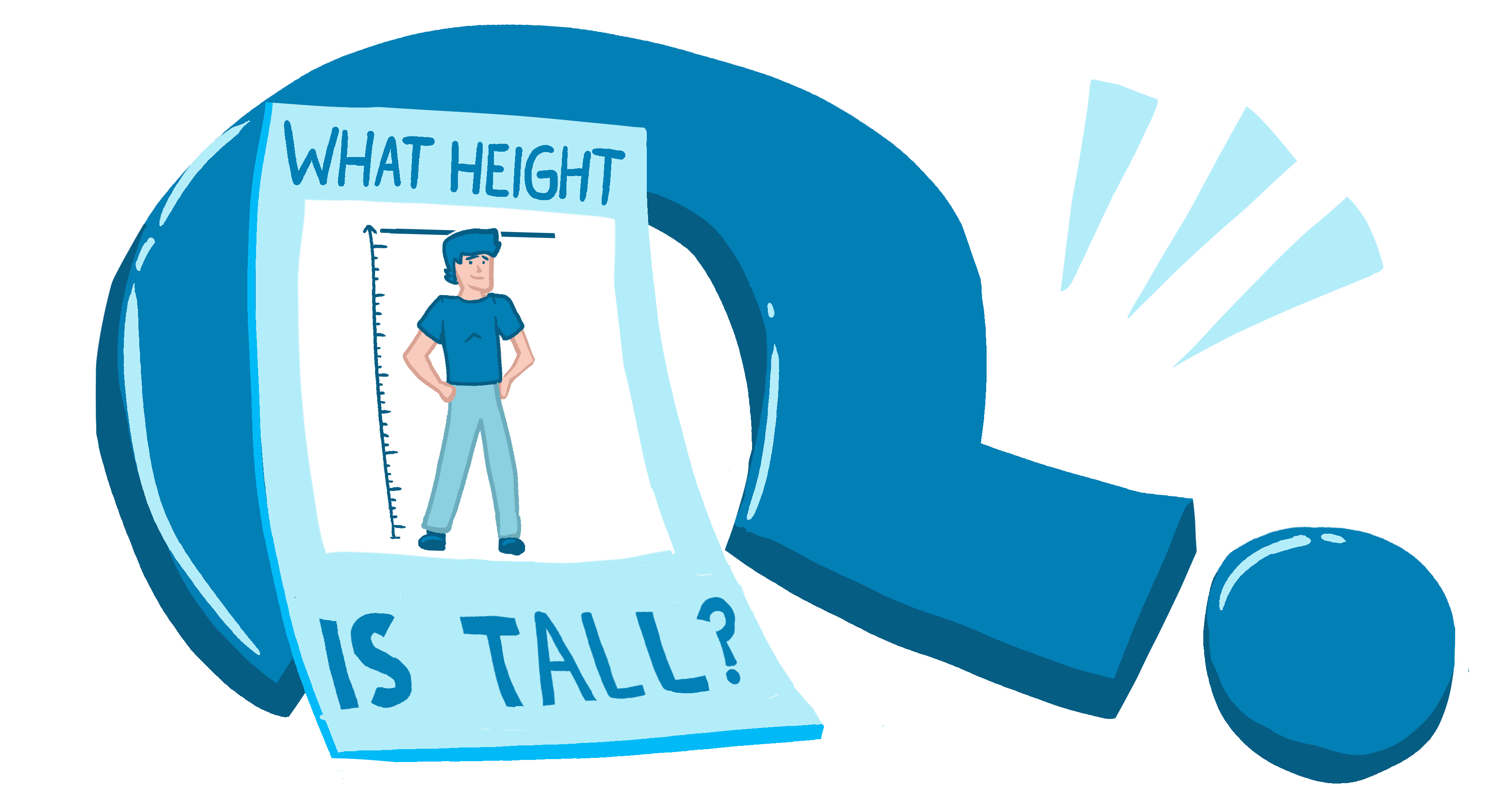 Whether people see a person as tall depends on a few factors – where they live, their ethnicity, their gender, and their age. While statistics and data don’t lie, they also can’t guarantee how a person is perceived.

To say the least, the answer to what height is tall is vague and subjective.

When people say “Beauty lies in the eye of the beholder,” what they really mean is tall and beauty standards are dependent on each individual. Keeping this in mind, people can utilize statistics to get a fair idea about their height.

The average height varies significantly from country to country and ethnicity to ethnicity. Genetics play a large part in determining adult height – they’re 80% of why a person is as tall or as short as they are.[1]

Since genetics vary by ethnicity and most people won’t be much taller or shorter than their parents, a person with a tall stature in one country might be a short guy in another. Take Denmark and Mongolia, for example.

The average Danish man is 5’11”, while the average Mongolian man is 5’6″.[2] The height of the average male in the US is 5’9″. If this man goes to Denmark, they may be short as most Danish men will be taller than them, but they’ll be considered quite tall in Mongolia!

So, if a person’s trying to determine whether their peers think they’re tall, they should search for their country’s average height and go from there.

What Height is Considered Tall Varies by Gender

Apart from a few statistical outliers, it’s evident that most women are shorter than most men. In the UK, the average man stands at 5 feet 10 inches, while the average woman is only 5 feet 4 inches tall.[3] This difference means that what’s considered tall varies considerably based on gender.

A woman will be considered tall at a much shorter stature threshold than a man, and men typically prefer shorter women and vice versa. Generally, women are most comfortable with a man 21 cm (8.3 inches) taller than them, while men want women 8 cm (3.1 inches) shorter on average. [4]

Country and ethnicity play a role here, too, as women in Denmark are 5’6″, which means they’re taller than most women in the UK. However, average female height doesn’t exceed average male stature in any country. After ethnicity, gender is the most significant determining factor when it comes to size.

What Height is Tall for Males

Statisticians divide men’s height into standard deviations of 3 inches. In practice, this means if the average US man is 5’9″, then a 5’11” male in the US will be considered tall as he’s one standard deviation above the normal height.[5]

Going by percentile, men 6’2″ and above are seen as very tall as they lie in the 95th percentile by height – only 5% of men 20 years and up will achieve this height.[6] The tallest person in the world, Robert Wadlow, stood at 8’11”! He lies significantly outside normal variance in height and this was largely due to a growth disorder.

Does a Woman’s Height Affect if a Man is Seen as Tall?

A study of men’s and women’s preferences in the UK regarding height found that British women think 5’11” is the ideal height for a man.[3] 5’11” is only 1 inch above the average male height in the country, indicating that most women in that region prefer men of average height or a few inches above.

However, when it comes to women over 5’7″, they prefer a man to be above 6 feet tall instead.[3] You can see the full poll here. This fact doesn’t mean that men over 6 ft are inherently more attractive, but the majority of taller women prefer taller men.

Although in general, it’s safe to assume that men 1-3 inches above their country’s average height may be considered tall by most women in a given country.

Like men, women’s height also comes in standard deviations, but the SD for female stature is 2.5 inches instead of 3. Since the average US woman is 5’3 ½, a woman one standard deviation taller than average will be 5’5″.[2]

It’s safe to say that women above 5’5″ will be seen as tall but not extremely tall. That title belongs to women standing tall at 5’8″ – these women lie in the 95th percentile by height, and only 5% of women above 20 will ever grow to this stature.[7] Models tend to be around this height as taller women thrive in this profession.

What’s Height is Tall, Short, or Average is Subjective

While height measurement may be objective, how tall a person appears depends entirely on the people around them. Statistics can only provide a vague idea of whether people perceive another person as tall or short.

A person’s geographical location, culture, and social circle establish whether their peers perceive them as tall. However, people can assume they’re subjectively tall if they:

Tower Over their Peers

If most people someone knows are shorter than them, they’re likely tall for their location and social circle. Though it might be hard to spot in person, this difference is especially noticeable in group photos.

Of course, if a person mostly hangs out with people like volleyball players, they might have a false sense of being short. It’s better to compare with a variety of peers to get a fair idea of comparative height.

A person who’s taller than average for their area will likely have difficulty finding clothes that fit. Pants won’t comfortably reach their ankles, and most shirts will turn into crop tops. If a person finds that most clothes they try are too short, there’s a good chance they’re pretty tall.

People can find someone quite easily in a crowd of people if they tower over everyone else. A person who stands out in a crowd is likely to be quite tall, especially since a big group will likely have a wide variety of people jostling around!

Get Asked if They’re a Basketball Player or Model

This question is the most unambiguous indication that a person is seen as tall – if people constantly ask them if they’re a basketball player (primarily for men) or a model (mostly for women), they consider that person tall enough to fit into those professions. Take that compliment with pride!

One’s adult height is a combination of both nature and nurture. There are a lot of complicating factors that affect height, such as:

Is the Population Getting Taller and Why?

Better access to nutritious foods like milk and eggs and advancements in medical technology are the primary contributors to this. Diseases, like mumps or rubella, at a young age can stunt further growth. These diseases have been almost eradicated with vaccines and can be treated effectively with modern medicine, making it more likely for children to reach their potential genetic heights.

Anyone Can Get Taller with Height Surgery

No matter someone’s current height, or what height is considered tall, modern technology allows just about anyone to make themselves through cosmetic limb lengthening or height increasing surgery.

This surgery is almost 100% successful,[11] but it can be too expensive and time-consuming for many people. However, it has been shown to be worthwhile for those who are bothered by their height.

If you’re considering this surgery, talk to a doctor and weigh the potential risks and rewards before making any decision. Remember, nothing is as important as your well-being.